Links Back To Those Articles!

Tales From The Dollar Bin

So, a guy walks into a used book store… And then he spends an hour sifting through the dusty bins and long boxes underneath the shelf of premium comic books. This is the story of what he finds.

Today’s buried treasure is Sergio Aragones Destroys DC, a comic, which I had no idea existed until I came across it in the third of five long boxes in the “S” section of the discount bins at Book Nook on Lawrenceville Highway in Lilburn, GA. I went into the place looking specifically for some Spider-Man: Clone Saga comics and when my thumb passed over this cover I was given pause. Sergio Aragones’ Groo was one of the first comics I ever owned as a kid and, like many 80s children, I grew up reading Mad Magazine specifically for Aragones’ cartoons. I especially loved the ones he would do in the margins of random pages. So a comic in which Sergio Aragones destroys anything at all is something I’m seriously interested in. 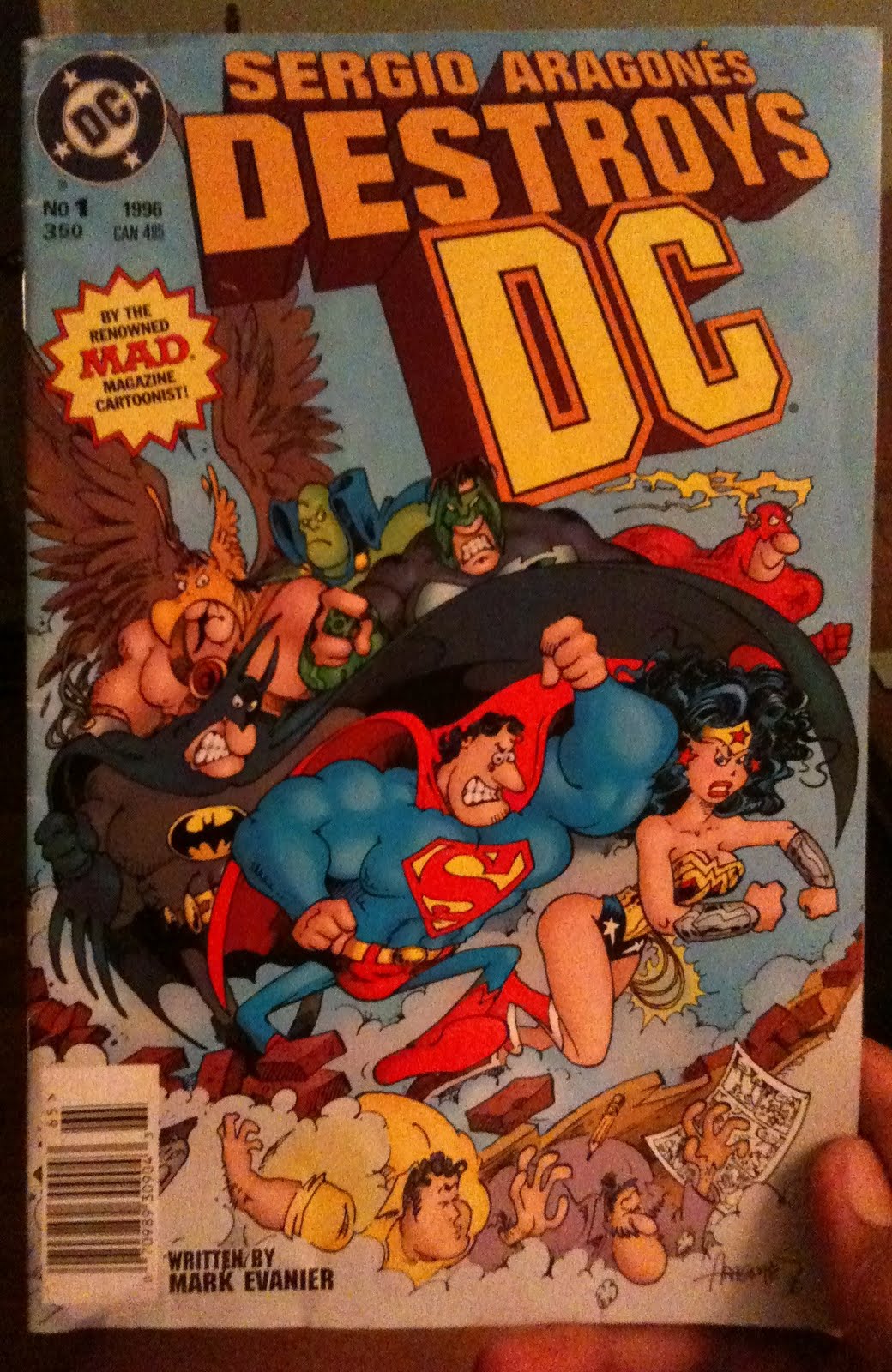 First of all, it’s called Sergio Aragones Destroys DC. Right off the bat that lets me know two things: 1) It’s going to be an exceptionally terrible, pun-riddled 90s “humor” comic in which the mainstays of the DC Universe will be lampooned by some writer turning in a half-assed script (in this case it’s Mark Evanier) as an excuse to allow the good Mr. Aragones draw some funny pictures, and 2) it’s going to be amazing.

Indeed, it is all of those things.

It starts out with Martian Manhunter responding to a cry for help, which turns out to be Hawkman foretelling the doom of the entire DCU by saying doom so many times that it’s just got to be funny, right? This sequence introduces the plot of the book.

The next scene shows Aragones at a drafting table with Evanier lamenting the fact that his career has ebbed so low that he has to write this comic (it’s meta!). Then it becomes an anthology comic showcasing really terribly unfunny retellings of Superman’s and Batman’s origins, a unabashedly misogynistic Wonder Woman story, and an actually really fun and charming Legion story.

It’s a really, really terrible comic book even though Aragones’ art is just absolutely terrific and rich with all the little intricacies for which his fans love him. There’s about seven other little background things like this happening on this one page from the Superman story, and this one is my favorite. Only Sergio Aragones could transform the horror of deadly ricocheting bullets into something fun. 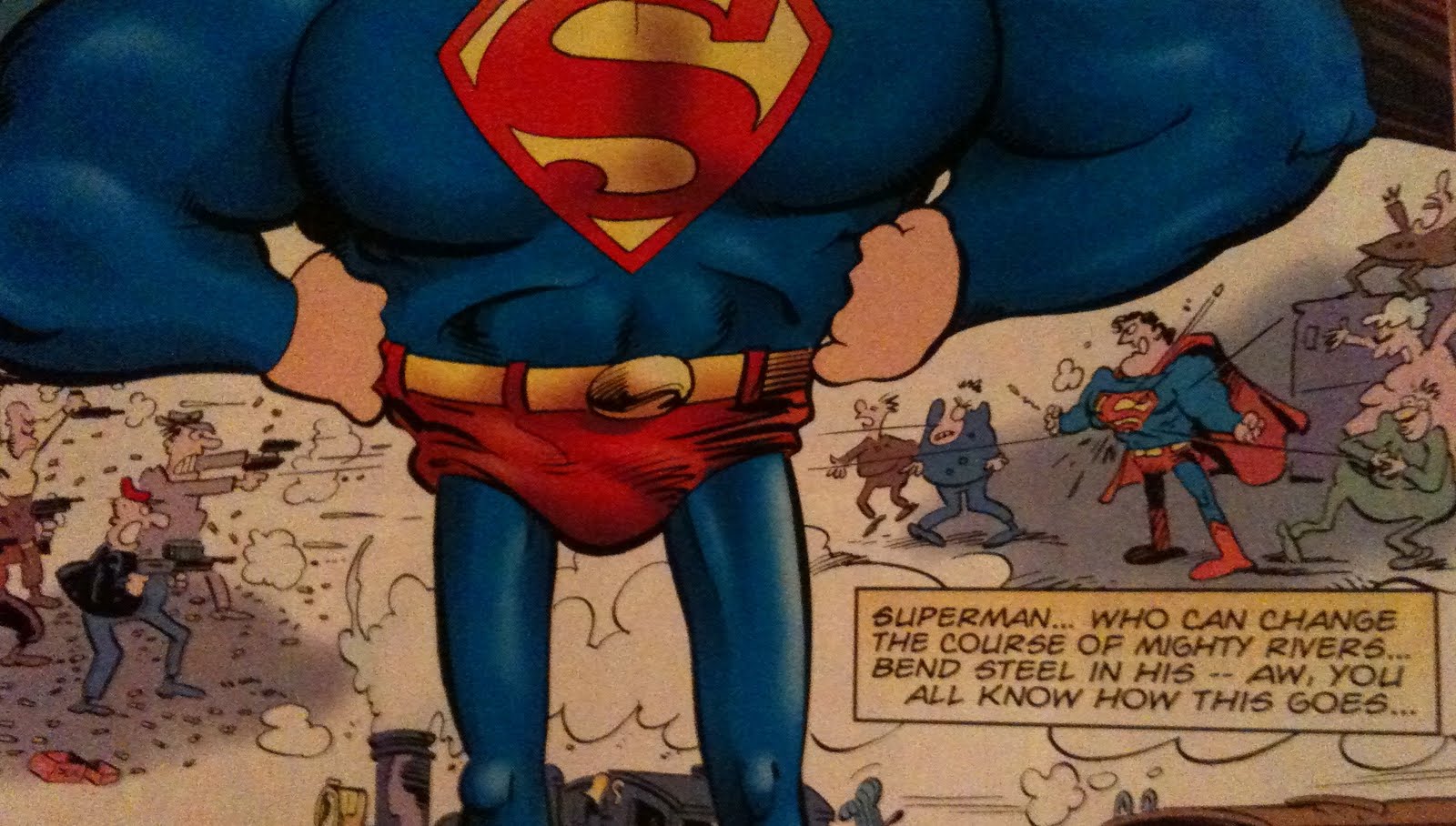 And here’s Wonder Woman rescuing a pervert from a mugger. What you don’t see is the panel in which a hundred other men run up to her asking to be tied up and beat also. And then the pervert she rescues offers her money to do it to him next time. The 90s! (Interesting side note: The Wonder Woman story was inked by John Byrne.) 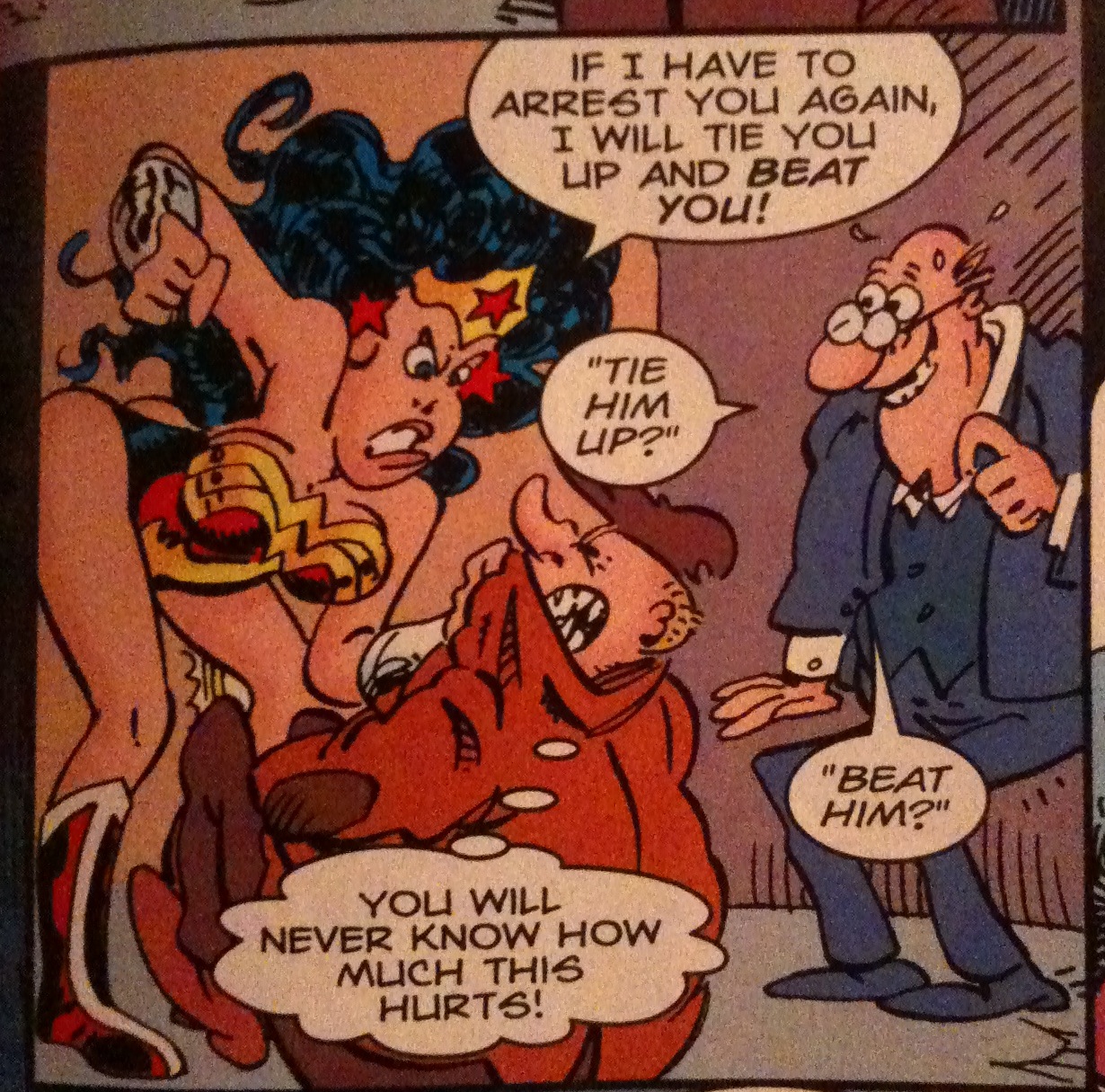 This right here is my favorite page of the Legion story. In it, a bunch of would be Legionnaires audition for membership. Since they’re all sucky heroes with sucky powers they don’t get in. I don’t know a whole lot about the Legion of Superheroes, but from what I do know this is totally a scene that could have been in the regular, non “humor” version of the comic. 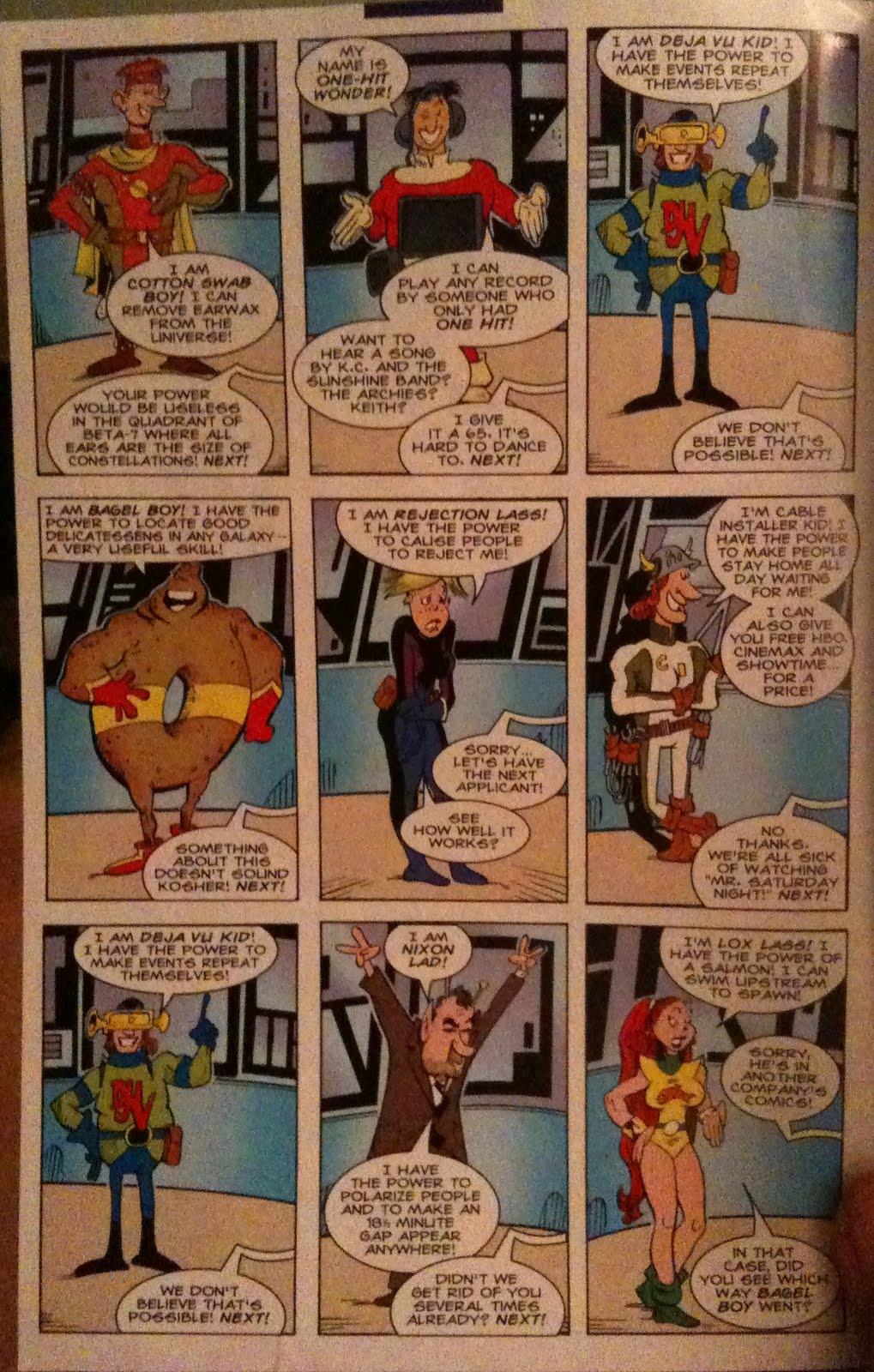 After the stars of the DCU get their time in the spotlight Hawkman gathers the Justice League on a random uninhabited planet to face the vague threat he was shouting about earlier. I have to admit, I was expecting the villain to actually be Aragones and Evanier since the book is calledSergio Aragones Destroys DC written by Mark Evanier and they would all jump out of the page on the drafting table and fight Aragones’ and Evanier’s cartoon selves. But no. The actual villain is… 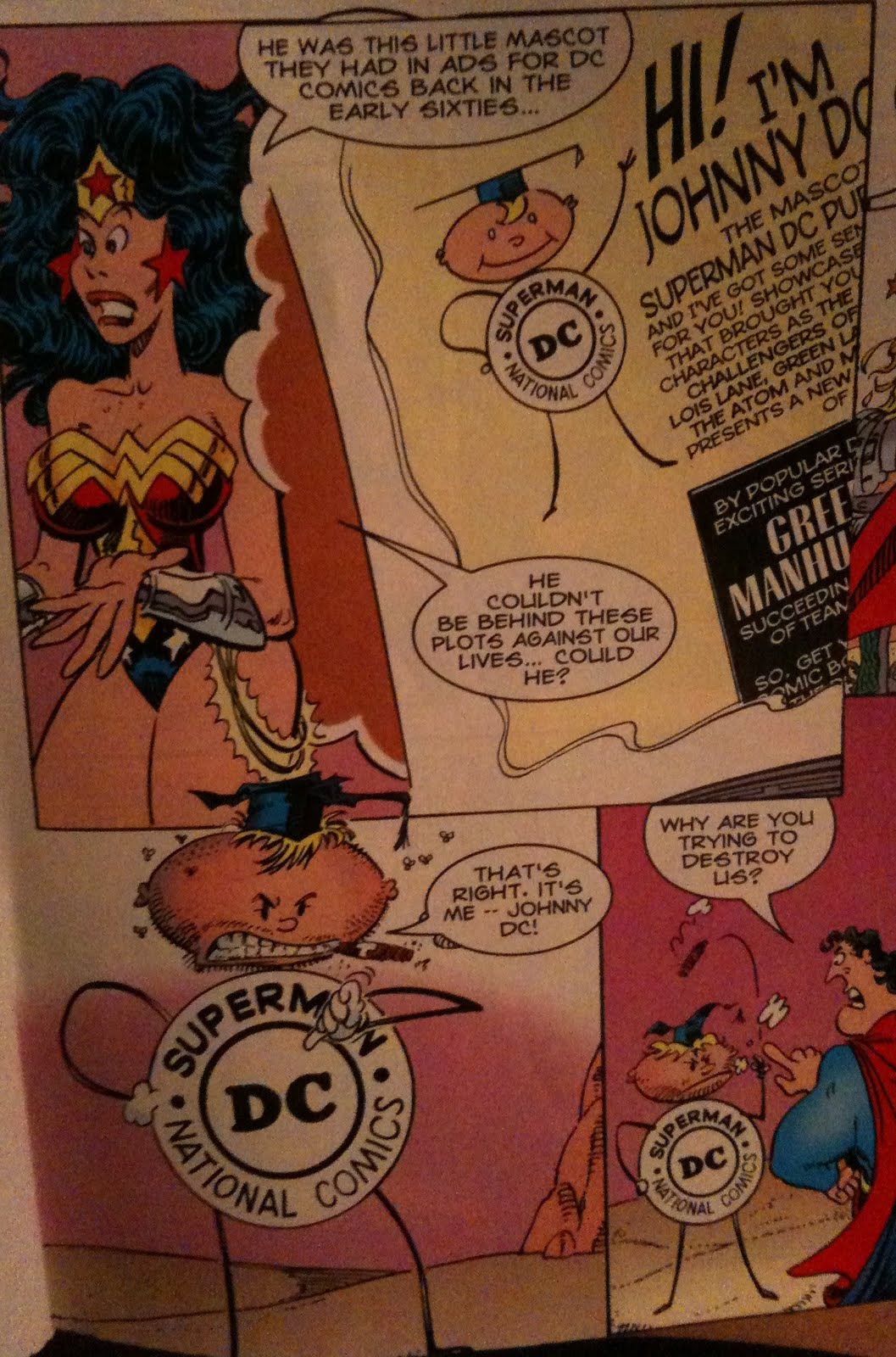 … Johnny DC. So, pretty much this comic is the basis of the video game Epic Mickey.

Johnny DC goes on to describe his fall from grace and why he became evil and there’s an actually funny bit in which he’s about to bed a woman and he opens his robe to reveal his logo and the woman laughs at him for being a “comic book fan.” If I had a nickel…

Then something magical happens. Johnny DC all of a sudden “updates for the 90s” before the Justice Leaguers’ eyes in what is maybe the most get-off-my-lawn-you-whippersnappers moment in all of comics history. 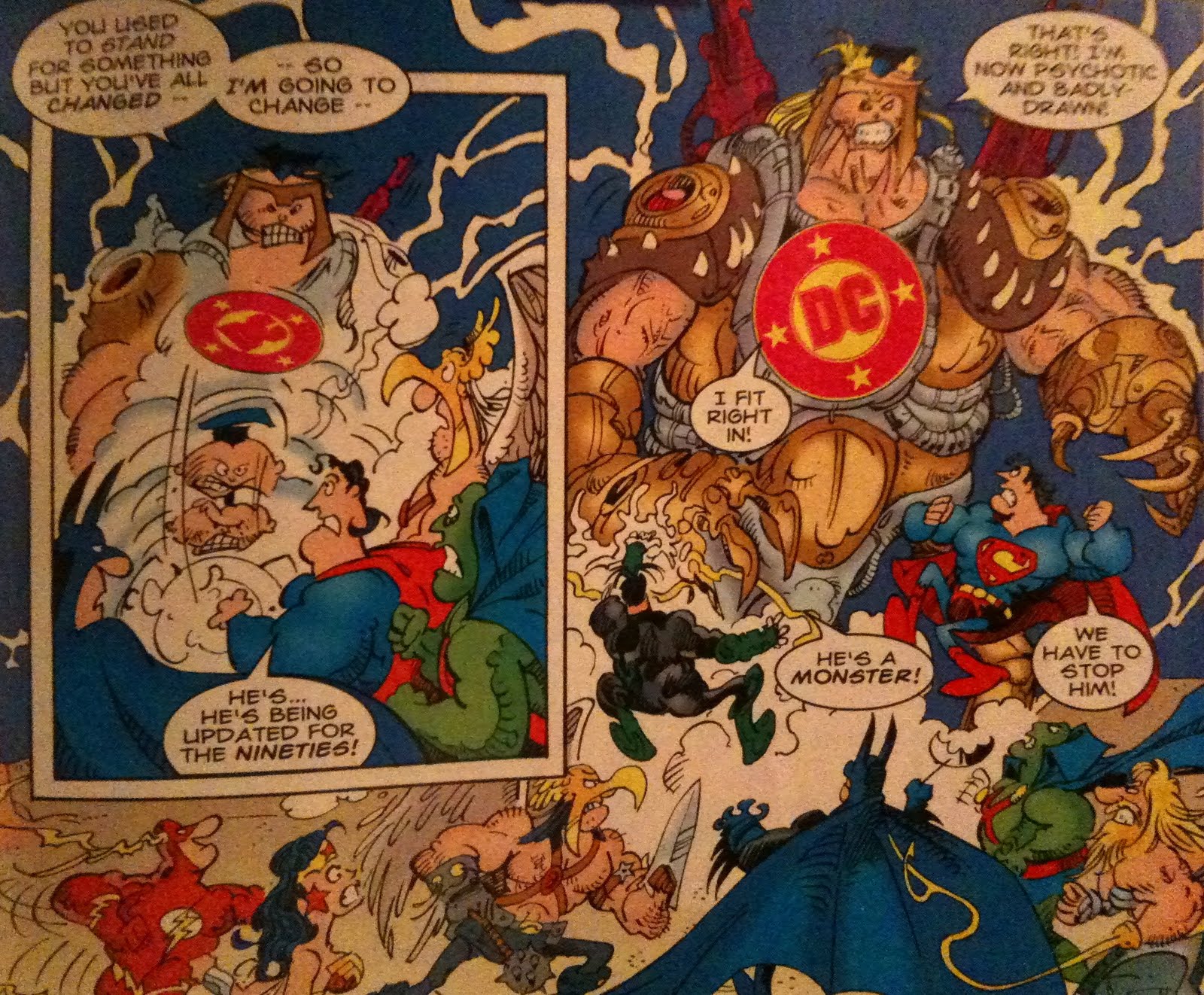 It turns out this entire comic book was written as a jab at the state of comics in the 90s, which, looking back, we can all recognize as objectively awful, but it takes a special kind of crankiness to bemoan the state of 90s comics within the pages of an extremely 90s comic. To be fair, if anybody had the right to do such a thing it was friend of Jack Kirby and frequent collaborator Mark Evanier. And in the end, Extreme 90s Johnny DC is tricked into saying his name backwards (um, what?) sending him back to the 5th Dimension, I guess, and the Justice League walks off into the sunset after resolving to be more like they were when Johnny DC first knew them.

Thanks for reading, everyone!

I’m still relatively new to the world of comics. I started with the Lobster Johnson mini, started writing webcomics, got a job at a comic shop and went wild from there. I’m a new comics guy mostly but I want to go back, read some old issues and I hope you’ll join me as I find the old gods.

Devil Dinosaur is one of those series that inhabits a weird place in my heart because I love it without ever having read the actual comics. It is a comic where a monkey boy rides a giant dinosaur who smashes things.

Devil Dinosaur #1 is the origin story and just like Action Comics #15 promised this is just a bit different. In fact BAM

Marvel get on this or get Devil Dinosaur involved with the new Moon Knight series.

So we are introduced to Moon-Boy, a Small Folk of the Dawn Man tribe, and his giant dinosaur brother from another mother Devil Dinosaur a.k.a. The Undisputed Master of the Valley of the Flame who is fighting the other dinosaurs, particularly this photobombing guy and Thunderhorn a uniceratops. Moon-Boy is established as the cheerleader and the brains of the duo. Devil Dinosaur is the muscle.

Luckily Jack Kirby was swell enough to translate everything in the comic into English so we can understand the dialogue. I point this out only because Kirby makes a point of saying “Although the language of primitive man is still unknown, it is translated here by the author for communicative purposes.”
That note actually worries me because it seems to hint that Jack Kirby not only is transcribing this scenario but he also holds the secret to the ultimate primitive languages. Is Jack Kirby the Moon Boy? Was there some sort of wizardliness?
After tossing Thunder Horn into a chasm we are introduced to the origin story of the Devilish Duo.

A younger Moon Boy discovered the members of the Killer Folk attacking a group of the Devil Beasts as he explored the fire mountain. There was only one young Devil Beast left and as the Killer-Folk approached to destroy it with fire, the mountain grew angry or it just explodes and the Killer-Folk run away.

The fires turn the remaining Devil Beast red and he saves Moon Boy from a Leaper (unfortunately not Batroc). Devil Dinosaur kills the beast but is wounded so Moon Boy helps to heal the beast.
When Moon Boy returns to his tribe the Small Folk run away because a guy who went missing comes back on a giant Devil Beast. I’d be running away. A ghost on a dinosaur who might also be a ghost is pretty horribly scary. Moon Boy reflects on the situation.

Meanwhile the Killer-Folk decide they want revenge as previous leader is defeated. They decide to light the forest on fire and to drop some rocks because these people are smart enough for rather advanced strategy (and fire) but building weapons beyond clubs is a tad too hard. Moon Boy and Devil Dinosaur wake to find the forest ablaze while the Killer Folk prepare for their assault.
Overall the issue was pretty fun in a sort of corny way but there isn’t anything wrong with this. I mean were it coming out now I’d probably get it for the fun.
At the end of the issue we are left with the questions – Were Dinosaurs As Smart As Men?

I was left with a few personal questions though.
Why is devil being used as an adjective? Will we actually see some devils in here? Would they just be dinosaurs or is devil the closest word the primitive people have? I mean I guess calling it motherhugging dinosaur might be wrong.

Nevermind. That is pretty good.

GREETINGS FOOLS, MY NAME IS IMMORTANG THE IMMORTAL ORANGUTANG AND AS MY CRIMES HAVE BEEN SO HEINOUS AS DEIGNED BY THE 24 HOUR NEWS CYCLE, I HAVE BEEN ORDERED TO RELEASE MY BOUNDLESS FURY BY PREPARING THIS LIVED-JOURNAL UNDER PENALTY OF JAIL WITH NO PROBATION.

I am also being censored now since I am being forbade, yes I Immortang the Immortal Orangutang, from speaking in all caps. The “civilized” barbarians of the modern world are once again dealing heavy blows to my ability to express myself, just as they did when I attempted to turn the President into an ape. All of a sudden my jovial prank turned into racism. I was not aware of the electoral process and the fact that we had a black president! I cannot vote! I live in the forests in a base surrounded by apes! Now my human mother will no longer talk to me. I am getting the cold shoulder from Mr. Fish. I did not know there were racial connotations! Yet what is a super genius turned orangutang human hybrid expected to do?

Either way, I am imprisoned and must write this journal that I may one day gain my freedom from this giant prison. While I lack the abilities of these other supervillains and yet if I were to capture their powers, I might destroy my foes and effectively destroy the super fools once and for all. By which I mean to… I shall… reform my actions that I may become a positive role model and I shall not need to sleep in a cell with Electro any longer.

Electro is a horribly incompetent fool. He is always babbling on about Spider-man. I could kill the Spider-man with his powers so easily. The average human is able to withstand at max around 400 volts considering that the ARACHNAFOOL is stronger than the average human. At the same time, the tram system running beneath the New York City contains 500 to 600 volts. Create a perimeter of electricity in the subway and condense it around him. He will be dead and you can go on getting revenge or what have you.

And here is the other kicker, if Electro wishes to succeed as well as STOP READING OVER MY SHOULDER YOU BUFFOON, all he may need to do is go smaller. If there are dozens of superheroes in New York City, go to another location. Chicago for example has no heroes or not and while the Spaceknights are located there, they have no members to speak of. The area has a large financial sector, a typically uncaring population and a varying crime rate. YES, ELECTRO YOU SHOULD GO TO CHICAGO AND TAKE OVER, MY GOD.

Of course I am not supporting crime as crime is evil and I am reformed at this time. SO PLEASE LET ME LEAVE!